A Win for Incarcerated Women: New Mexico Court Says Breastfeeding is A Right Even Behind Bars

We know that dangerous stereotypes of who will and won’t breastfeed can impact practice and purpose—affecting whom we raise our voices for and whom we may feel is not worthy of a shout.

And in a society where breastfeeding is often associated with a determination of being a so-called “good” or “bad” mother, then assumptions about which mothers want to breastfeed and who is “worthy” of the privilege become even more complex when considering women in prison. In those simplistic conversations, there is little consideration of the role of poverty, systemic racism and the woeful lack of support services and its impact on how women end up in prison.

The judgment is simply quick and severe.

Last week, a judge in New Mexico submitted a groundbreaking written order establishing the right of all incarcerated women in state prisons to breastfeed. The order went one step further to also include access to an electric pump so that new mothers can provide breastmilk when they are separated from their baby.

The case involved 33-year-old Monique Hidalgo who wanted to breastfeed her 5-week old baby Isabella, when she was brought to visit on weekends by her father. The Corrections Department said No. Ms. Hidalgo also wanted an electric pump so she could maintain her supply and provide breastmilk for her baby when they were separated. The Corrections Department said No to that too. So she sued.

And with the support and advocacy of the New Mexico Breastfeeding Task Force the ACLU and other partners, including on-the-ground recommendations from Young Women United, a new milestone in breastfeeding normalcy was achieved. Did you and your organization share the good news?

While the order stands to impact countless women in state prison in New Mexico it also has sweeping national ramifications. And for our work.  It’s an important leverage point for an uncomfortable conversation about how incarcerated women are viewed in society, and perhaps even within the breastfeeding movement.

You should have seen the Facebook comments on recent posts covering the news of the New Mexico case. Women claimed that Ms. Hidalgo didn’t “deserve” to breastfeed and that she was not worthy of the privilege to breastfeed.

To start, the judge’s ruling clearly established what we know and fight for—that breastfeeding is a right. As long as it is viewed as a privilege, then subjective lines are drawn about who deserves to breastfeed and who actually cares about giving the best infant nutrition for their child. A privilege must be earned or it is given to only select people.

Nor can we forget that the corrections system was built by men and for men. Women are the fastest growing population, but still a very small percentage of the overall prison population. And we know how well most patriarchal structures and institutions have historically served the needs of women.

And what of the innocent baby?

Our society’s deep focus on punishing mothers has forgotten about the helpless infants who are often ripped away from their mothers hours after leaving the womb and then denied the bonding and preventative health benefits of breastfeeding, even though maternal contact has been shown to improve child development outcomes over and over again.

All infants have a right to equal access to their optimal food, too.

Meanwhile, researchers are finally saying what we have known for years: Breastfeeding is healing.

Not just the milk, but the bonding experience too. Babies who will be ultimately disconnected from their mothers for extended periods of time at least deserve the gift of early bonding. Recently a New York Times article showed that opioid addicted babies recover quicker and often without any drugs when they are kept with their mother. That time with their mother can include breastfeeding of any variation.

“The model of care that’s being touted now is really that the mother is the first line of treatment for the baby,” said Dr. Debra L. Bogen, a professor of pediatrics at the University of Pittsburgh School of Medicine, speaking about a recent study of opioid addicted babies.

Mothers are helped too.

“Separation may impair her attachment to her baby, increase the guilt she feels about the impact her addiction has on her baby and diminish her perception of her own mothering capacity — all of which can increase her risk of relapse,” Bogen said in the article.

Infants who are born to an incarcerated mother—whether she is drug addicted or not—are already at a disadvantage. Does society need to pile on, by denying bonding, breastmilk and a better chance at healthy development?

As advocates, who have moved our efforts into employers offices, day care centers, shopping malls and into communities, we cannot forget about mothers who are behind bars. And as our understanding deepens of the social stressors and environmental factors that contribute to successful breastfeeding, we can’t forget about shedding light on some of the root issues and alternative solutions that would keep more women out of prison in the first place.

“In general, reproductive justice stops at the prison door,” Amy Fettig, Deputy Director, ACLU National Prison Project, said to me in a recent interview, noting that in more than half of U.S. states, it is still not illegal for women to give birth in shackles.

We can do better. Yes, we have many doors to knock down to support equal access to breastfeeding, but we should not forget prison doors. Many thanks to Ms. Hidalgo and baby Isabella for the reminder.

Kimberly Seals Allers is an award-winning journalist and nationally recognized advocate for infant and maternal health. A former writer at Fortune and senior editor at Essence, she is the author of The Big Letdown—How Medicine, Big Business and Feminism Undermine Breastfeeding (St. Martin’s Press). A former Food & Community Fellow with the Institute for Agriculture and Trade Policy, Kimberly is a divorced mother of two. Follow her on Twitter at @iamKSealsAllers 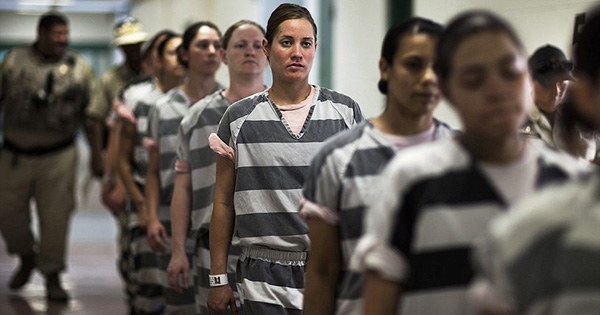