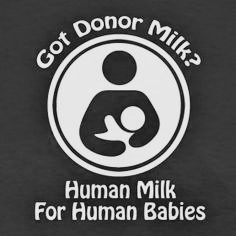 Wanted: Food Justice for all Flint Babies. Why is the Government Only Funding Second-Rate Infant Food?

Sadly, many babies in Flint are being severely shortchanged.

The federal government has gone through great lengths (and rightly so) to provide funding and new programs to improve the nutritional content and increase the school food options for children in Flint. But when it comes to babies, the government keeps supporting only one alternative food option—ready-to-feed formula. What about pasteurized, donor human milk?

Mothers who were breastfeeding should not have to forgo the benefits of breast milk they were committed to providing because of the rampant negligence of government officials. And all mothers should have more than one option. Why not give mothers access to something that can actually improve the health of their infants and possibly counter some of the damage inflicted by this unthinkable tragedy?

“This crisis is creating concern for the nursing mothers of Flint, who don’t know if their breast milk is safe. For them, using formula undermines their ability to provide breastmilk for their children. Until nursing mothers in Flint have the complete information and knowledge that their milk is free of lead, they and their families must have access to safe, pasteurized donor human milk,” says Rep. Erika Geiss (D-Taylor). Since 2015, Geiss has been working on legislation (House Bills 4206 and 4691) to provide access to and safeguards for donor human milk across Michigan.

Yes, you can feed McDonald’s to a sick and hungry child—it will satisfy the need. But it doesn’t provide the same nutritional benefit as a healthy meal of fresh fruits and vegetables. This is exactly what’s happening in Flint.  Yes, infant formula will do, but compared to breast milk it’s basically junk food. And it seems like an injustice upon an existing injustice to not provide Flint babies with the absolute best—the most nutritious infant food possible—one that offers immunological and preventive health benefits that formula cannot. Breastfeeding mothers in Flint should not see their efforts sabotaged or terminated by systemic breakdowns and the repercussions of environmental racism that are beyond their control.

But donor human milk isn’t cheap. That’s why the Human Milk Banking Association of North Association (HMBANA) is working with Representatives Geiss, Sheldon Neeley (D-Flint), Phil Phelps (D-Flushing), Kiddada Green of Black Mothers Breastfeeding Association and other community partners to call for some of the millions of federal funds going to Flint, to be allocated for purchasing pasteurized donor human milk from HMBANA milk banks. In many states, Medicaid already covers the cost of donor human milk, but it does not in Michigan.

“A portion of the state-proposed $15 M provided under the Food and Nutrition Budget Supplemental for Flint to deal with the Flint water crisis should be immediately released to support Flint’s youngest and most vulnerable infants,” says Kiddada Green, Founding Executive Director of Black Mothers’ Breastfeeding Association, in a recent HMBANA press release. “We must be assured that pregnant and breastfeeding mothers are no longer victimized. Forcing mothers to compromise the health benefits associated with exclusive breastfeeding for the use of infant formula when safe donor milk is available here in Michigan should be unlawful.”

In the U.S., pasteurized donor human milk, is primarily used for premature and sick infants in the NICU. That is mostly due to a limited supply being reserved for the babies that need it most. Infant formula can have fatal consequences in underdeveloped gastrointestinal systems. For those infants, breastmilk is literally a life-saving food.  But donor milk does not have to be only available on a dire need basis and certainly Flint is an emergency circumstance that should ensure access to safe, pasteurized, donor human milk for mothers who want it, without interfering with the NICU supply.

The situation highlights a key problem in the infant feeding landscape in America, where the conversation is typically only framed as the choice between  mother’s milk or manufactured formula. In situations when mothers can’t breastfeed, pasteurized donor human milk should be the secondary option, not infant formula. Even the National WIC Association recommended back in September 2014 that human donor milk should be used for babies if a mother’s own milk is not an option. In 2012 the American Academy of Pediatrics (AAP) released a similar policy statement recommending donor human milk for pre-term and term infants.  Infant formula should be the last resort.

Yet, somehow, when it comes to Flint, it’s the only option.

Formula has had its own problems, including numerous recalls for containing arsenic, beetles and other bacteria. Most formulas use milk from cows treated with rBGH, and it contains dangerous sugars, such as sucrose, that are banned in Europe because of their known link to childhood obesity. Some so-called organic formulas use hexane–a component of rocket fuel–for processing. And for years the government has been one of the largest purchasers of infant formula, via the WIC program—and that government continues to prop up the formula industry at the expense of the health of Flint infants.

“The whole nation needs to come together to address the critical need of safe, pasteurized, banked, human milk that’s also collected and disbursed ethically,” Geiss said in an email interview.

However, the facts remain: Flint babies deserve better. Yet once again, second best is being offered—this time to the city’s most vulnerable residents and with government funds. Flint infants deserve better than junk food.

For the past few weeks I’ve been involved in conversations around getting a donation of human donor milk to Hurley Hospital in Flint. The milk bank at Bronson Methodist Hospital in Kalamazoo, Michigan has stepped up to plate with a donation. But more is needed. For one, we need more donors across the country to contribute to non-profit milk banks that provide milk without regard to profit. “It would be incredibly helpful for healthy mothers willing to donate an oversupply to connect with a milk bank and see if they would qualify as a donor—as long as they’re not interfering with feeding their own child/children,” Geiss continued, noting that she in no way wants to vilify formula.  The ongoing commercialization of mother’s milk, means some mothers can get paid for their milk rather than just donate it, but that milk is being sold at a profit, by for-profit entities, and mothers have no idea where their milk is going.  HMBANA’s non-profit, donor model puts compassion before cash flow and responds to the needs of babies not the need for profit margins.

Flint is just the latest blaring, embarrassing and disgusting example of how economic interests override public health. It’s time for Flint leadership to prove they are charting a new course and immediately use federal funds to put the health of all infants first.

Kimberly Seals Allers is an award-winning journalist and a nationally recognized infant health advocate, speaker and author. A former writer at Fortune magazine, her next book, The Big Let Down: How Medicine, Big Business and Feminism Undermine Breastfeeding, will be released in July by St. Martins Press.  A graduate of NYU and Columbia University Graduate School of Journalism, Kimberly is a divorced mother of two. Follow her at @iamKSealsAllers

3 thoughts on “Wanted: Food Justice for all Flint Babies. Why is the Government Only Funding Second-Rate Infant Food?”

PrevPrevious PostDealing With My PTBS–Post Traumatic Birth Syndrome & Why I Joined The CABC Board
Next PostDoes Women’s History Month Exclude Mothering? And Why Feminism Has Everything To Do With ItNext